Skip to main content
The Amateur Astronomers Society of Voorhees, 2018.

The Amateur Astronomers Society of Voorhees, 2018.

​In 1966, artists Robert Rauschenberg and Robert Whitman and Bell Labs engineers Billy Klüver and Fred Waldhauer established the collective Experiments in Art and Technology (E.A.T.) with the intention of promoting collaborations between artists and scientists, thusinitiating what is now recognized as a watershed effort in nurturing new kinds of interdisciplinary exchange. In the spirit of such collaborations, The Amateur Astronomers Society of Voorhees and Columbia’s Astronomy Public Outreach program present Signal to Noise, an interdisciplinary salon centering on the topic of sounds of the solar system. A talk by a Columbia astronomer, the presentation of sound and video art pieces, and the distribution of a zine will take place in a variety of locations in Columbia’s Pupin Hall—a lecture hall, a library, and a stairwell—and will be followed by public access to the department’s observatory for stargazing. Featuring projects that simultaneously embrace, reconfigure, and trouble scientific data and technological ideals, Signal to Noise aims to create an overlapping dialogue that playfully underscores both the confluences and points of fracture between artistic and scientific perspectives.

Presented as part of the exhibition New Talent at the Wallach Art Gallery. Co-organized by Summer Ash, Emmy Catedral, and Madeline Weisburg.

The Amateur Astronomers Society of Voorhees, established by Emmy Catedral in 2012, examines the ways in which humans use language to attempt and sometimes fail, to codify what we know about the universe. AASV hosts salons inviting guest artists, historians, scientists, collectors, and storytellers to present or demonstrate on a particular subject or question. AASV activities take on various forms, from walks, to collaborative texts and performance, and printed matter. AASV has presented work in collaboration with the Queens Museum, Sadie Halie Projects, Primetime, and the Center for Book Arts.

Columbia Astronomy Public Outreach Program is a subset of the Astronomy Department at Columbia University in the City of New York. They provide public education and outreach activities to the New York City Metropolitan Area. The historic Rutherfurd Observatory resides on the top of Columbia University's Pupin Physics Laboratory housing the university's astronomy and physics departments. More recently, astronomical research at the observatory has been curtailed by the advent of light pollution; nevertheless, it is still one of the best places in Manhattan to view the stars.

Pupin Hall is located at the northern end of Columbia’s main campus. In order to get to the Pupin 301 and the Astronomy Department Library, enter the main campus at 116th Street and Broadway on foot. Pupin is easily identified as the tall building in the northwest corner of campus with a green astronomical dome on top. Upon reaching Pupin, follow the posted signs to the designated rooms for the lecture and performances. Lectures are wheel-chair accessible. Please note that the observatory is not wheel-chair accessible. 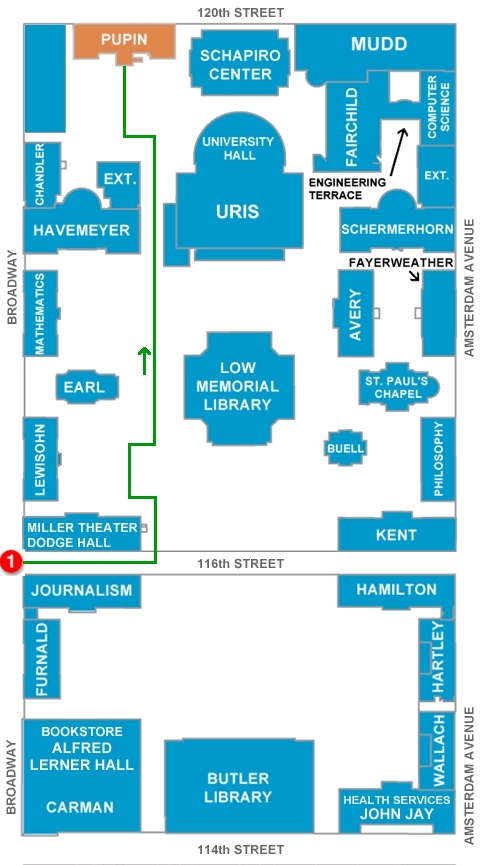